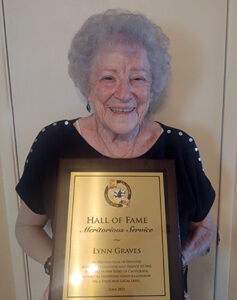 Lynn Graves has been named to join the CUSBC Hall Of Fame for Meritorious Service. She lives in Chula Vista and has been a certified bowler for over 50 years. She has been a member of the San Diego WBA and the San Diego USBC for over 50 years. She has served as the SD WBA President from 1983 to 1988. She was the Association Manager for the SD WBA and the SD USBC from 1988 to 2020. She has been a director of both organizations since 1970. She has conducted the SD USBC championship tournaments – Open, Womens, and Youth. She was also the Director of the Men’s Masters, Womens Queens, the Guys and Gals tournaments, and the Senior Open tournament. She has been with the CUSBC and the California State WBA since 1997 to present. She has served as the Sergeant-at-Arms and has been on the BVL, Hall of Fame, Strategic Planning, Legislation, Senior Tournament and Convention committee over the years. She served as one of the Assistant Sergeant-at-Arms for the WIBC convention from 1983 to 2006. She was on the local San Diego 600 Club, San Diego 200 Club and served as the PTA secretary for her children’s schools. She was inducted into the SD WBA Hall of Fame in 1993 and is also a member of the Bowling Writers Hall of Fame. Thank you Lynn for your many years of service to the Bowlers.