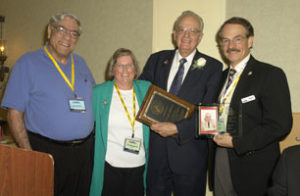 George Glavas dedication to bowling is renown. He has served in all offices of the many leagues he has bowled in. He served on the Sacramento Bowling Association’s Board of Directors for over 50 years. He served on all committees and was elected 4th Vice President in I 960, moving up through the chairs and became President in 1965. He also served as Association Secretary in 1974- 75. In 1971, he was the local chairman of the California State Tournament Committee. The Association still holds the record for the most entries from a host association along with setting a total team record in 1971.

George helped to formulate the History and Hall of Fame Committee in 1965. He served as the first chairman of this committee for setting up the by-laws to select candidates to the Hall of Fame. The by-laws which have been changed little over the years was acclaimed by the ABC Hall of Fame Board Secretary, as the best arranged and most logically written he had ever seen. He asked for permission and George agreed to allow him to use them a-. one of the mailing pieces to help in answering the many requests about Halls of Fame throughout the United States.

George has many attributes about him. He has a way of putting words together to tell it as it is. He has written many articles for the Sacramento Bowling News and local newspapers. He received the Bowling Writers Award, 1st in the Editorial Division in 1966 from the Bowling Writers of America. His column “Down the Alley” was most informative to his many readers.

The Sacramento Bowling Association presented to him on July 26, 1969, the 1st Annual Ralph B. Sutton Memorial Distinguish Service Award for Meritorious Service to the community.

In 1970 he was elected as a State Director of the California State Men’s Bowling Association and served in that capacity until 1976.

In 1971 he was elected and served as a Director of the American Bowling Congress until 1976 serving on the High Score and Legal Committee.

He was the first male to ever serve on the California State BVL Committee.

In 2004, George was elected to serve as a Director on the California State Senior Board.

Even though he didn’t run for election on the new Sacramento Area USBC Association Board, he continues to volunteer in any way he can. BVL is a passion for him and he was the first person to volunteer for BVL week. He will volunteer to work our tournaments especially the senior tournaments. He had been house director at Alpine Lanes so many years that league secretaries still come to him when they have a problem. But George, being the diplomat that he is, refers them to the current house director or the association office.

During the summer of 2007, GSA hosted the state youth tournament. As always, George volunteered to work the tournament. In fact, he worked every squad except one and that was because of our Installation Dinner. He was at AMF Alpine Valley Lanes every weekend day from early in the morning until the last squad was finished all through the tournament. And that is from a man who just turned 80 years young.

George has demonstrated his Meritorious Service by his contributions, accomplishments and awards during the past 50 years. He has distinguished himself and deserves to be inducted into the California USBC Association’s Hall of Fame.