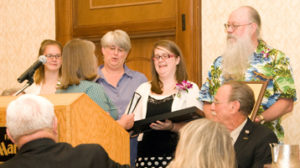 Vern Reilly had an amiable personality that endeared him to many people across the country. He was a quiet, always smiling person who rarely got mad when things or people got him upset. He was always being sought after by bowlers, bowling proprietors and managers because of his knowledge. He always knew what he bowlers were talking about. He had the knack of being able to listen, ask questions, then discuss and express his thoughts and ideas. He was never one to jump to conclusions, he kept an open mind. It was his keen ability to communicate and work with bowling center managers and proprietors that brought about the Sacramento Bowling Council. The council brought together the local association leaders and bowling industry leaders to discuss problems and work on projects to help overcome challenges in a unified effort. It was a way to help increase membership and bring bowlers into the centers.

In 1967 he was elected as a director to the Sacramento BA Board. His vast knowledge and dedication to the sport of bowling did not go unnoticed and in 1970 he was appointed to the position of Secretary, succeeding Dave Lumley who had taken a position with the American Bowling Congress.  Vern served as Secretary for two years. He returned as SBA Secretary in 1975. He was a member of the committee that brought the state championship tournament to Sacramento in 1971. Bill Franklin, then CSBA Secretary praised Vern for his diligence in processing average verifications for local bowlers’ by doing it in an expedient and efficient manner. His work ethic did not go unnoticed.

In 1976 he became a director of the California State BA and served as director and as SBA Secretary until October, 1983 when he was appointed secretary and tournament director of the state association. In 1991, he retired from that post. For those of us who knew Vern, being ‘retired’ wasn’t really correct since he would work in the state office during the heavy load periods and he worked part-time as desk man at Alpine Valley Bowl where he continued to serve bowlers. When you needed something done you called Vern and he would help with any project or job that needed to be done.

In 1977 he served on the Roll to Reno committee which sent a record number of teams to the ABC tournament.

In 1994 on his own initiative, he secured 100 spots for Sacramento area teams to bowl in the 1995 ABC Tournament in the new Reno National Bowling Stadium. Even before the availability of the spots had been made public, he had half of them filled.

Vern was a member of the transition committee that helped merge the Sacramento BA, WBA and YABA. He worked along side the women and youth in an effort to shape the new organization. He helped to streamline programs and keep programs he felt should be kept, expanded or discontinued. He listened to the bowlers in our area and knew what they wanted. Even with all the changes that were going on, Vern was very knowledgeable when it came to the bowling industry. He many not have liked all the changes that were going on but he would keep a positive attitude, for the most part, and listen to what the rest of the committee would say.

Even after his so called “retirement” Vern continued to be active in the bowling community as a volunteer for the GSA USBC. He helped the local association during BVL week, worked tournaments, presented awards when needed, he would stop by the office to pick up entries to take out to the South Area centers and he would even deliver sanctions or award forms to the office from league secretaries. He stayed current on what was happening with both the California USBC and USBC .

Vern Reilly’s integrity, forthrightness and dedication have been respected by everyone who has ever worked with him. This was confirmed many times over the years by the countless number of people who continued to ask him questions and seek his opinion.

George Glavez, a very long time friend of Vern’s said when nominating him for the SBA Hall of Fame “In the 40 or more years of my involvement with bowling, I have never met anyone as dedicated to the sport as he is. He is ‘Mr. Dedication.'”

Vern’s dedication, loyalty, hard work and long time service to the members of both the California and Greater Sacramento Area USBC certainly should be recognized by selecting him to the California USBC Hall of Fame for Meritorious Service.