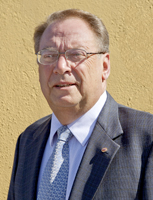 Butch was born in 1940 and was raised in Como Park, Minnesota. His father was in the bowling business of building lanes and pro shops. Butch assisted his father by repairing pin setting machines, building bowling lanes and working in his pro shop drilling balls and waiting on customers. He set pins all through high school at 3 different centers and eventually graduated from Washington High School. He received his AA degree from Community College of the Air Force with further study in the public relations discipline at Arizona State University.  Butch left home in 1958 to join the Air Force and retired in 1981 from Williams AFB, AZ with 22 years, 3 months and 24 days of service.

Butch’s bowling history started in high school with a 165 average his first year. He won the MN state high school championship his senior year. He had a career high game of 300 and a 767 series. Butch has been involved with local association since 1959. He was hired as a field consultant for USBC in 1982. After retiring 20 years later, Butch was re-hired back with USBC as a Customer Relations Consultant for USBC’s national tournaments.

The influences in Butch’s life include his father, who is a member of the St. Paul and MN State Hall of Fame; USBC Staff members Rogers Tessman, Bert Kellerman & Darold Dobs; ABC Directors: Ken Knapp of LA, George Zeidell of San Diego, Jim Hilliker of Sacramento, Glenn Weaver of San Jose, Al Hoffmann of  Novato and Mike Lucas of Valley Center; and lastly his hero, Bob Wiley. Butch has received the SoCal Bowling Writers Ray Handley award and is a life member from the Northern Santa Barbara County BA.  Butch passed away on January 19, 2018 in Tucson, AZ at the age of 77. He will be dearly missed!