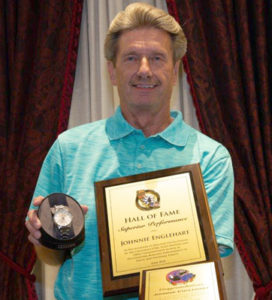 Johnnie Englehart started bowling at the age of 6 in the hallway of his house. His father would set up plastic pins and he would knock ‘em down! Bowled in Bantam leagues at 6 and has not looked back!! He has bowled over 65 300 games and over 66 800 series. In 1987 he won the Men’s State Scratch All-Events and came in 2nd in 2004 in the same event. He was inducted into the LABA Hall of Fame for Performance in 2004. He has a high average of 246. His special moment was when his son Scott shot his first 300 and 800. Johnnie was there to watch it!! Johnnie also made it one for the record books when HE also shot a 300/800 series 8 lanes away!