The 12th annual CUSBC State Convention took place up north in Fresno the weekend of June 9-10.  Delegates from associations all across the state attended.  Here is a recap of what took place on Saturday.

Sat., June 9:
Saturday morning was the Youth Meeting.  We had a nice attendance along with a handful of the youth bowlers. Since we had youth in the room, we picked their brain in asking them questions about other sports and how their schedules are with youth bowling programs. One youth, Derek Delgado from North LA County, spoke on how he plays high school basketball, golf and volleyball. He explained how the basketball season works and on the different costs they need to spend for equipment and apparel. David Waybright, from Golden Empire USBC, spoke about his high school team and how he has similar costs that needed to be spent each season for shoes, uniforms, etc.

We discussed how the “normal” Saturday morning youth programs are not necessarily the best time for some of these youths, especially the ones playing high school sports. Andre mentioned how Lynn Matsubara started her own league that is only once a month and it’s called the “Average League” because that is what you end up with–21 games and an average league. It’s an adult youth league and Andre’s son even qualified for Pepsi in that league. All you need is 4 people to make a singles league!

We also discussed short seasons and some great suggestions came out of the meeting such as family discounts for multiple kids that are joining the youth program, practice discounts and one-time league fees in the beginning.

Our other main topic for discussion was bridging the gap between youth bowling and adult bowling. That stepping stone is Collegiate Bowling. We passed out some information explaining how Collegiate bowling is setup with USBC and we are compiling a list of the active California colleges that need bowlers or are trying to start their own bowling teams.  Currently, the active CA schools are UC Davis, Cal Poly San Luis Obispo, CSU Fresno and San Jose State University. We will publish info on the CalUSBC.com when we get more information.

Saturday afternoon was the USBC Jamboree that started with a presentation by David Prange/USBC Western Regional Manager.  David gave us a recap of what was covered at the recent USBC National Convention that was held in late April in Reno.

First we saw a video of this year’s motivational speaker, Sam Glenn entitled “Igniting Progress” which was centered around our attitude.  He demonstrated by painting a canvas himself which surprised everyone when it turned out to be an eagle.  His main points were to combat stress with a good sense of humor.  Is there any benefit to being uptight?  A real leader understands they are a student every day.  He then reflected on his Mom and her fight with cancer and who is now a cancer survivor because attitude is everything!  He also used an example of sharing your popcorn is sharing your heart.

Legislative Update –
Tournament Rule 303 – requires all tourn. mgrs. be members of USBC.
Tournament Rule 319a – Assoc. Mgrs. not required to use printed Average Books anymore.
Tournament Rule 325 – Allows a tourn. to have a rule to allow teams bowling alone to set their own pace.
Bylaws B3 – Allows State Assoc. to have (2) “At-Large” Directors.
The above are all effective Aug. 1, 2018.

Lane Certification Info – Next up was explaining the new requirements for Lane Certification Committees that took effect Apr. 1, 2018 on measurements and the new requirement of having three signatures on the reports (person doing inspection, proprietor and Assoc. Mgr.).  This service is being done for the proprietors.  Did you know, 85% of the lanes in the country are synthetic (measuring 5 panels)?  Three panels are for wood lanes.  All lanes will be certified because of now measuring all 5 panels.  Next year they may not if the lanes don’t make the corrections or fix problems.  Inspection equipment can be ordered at USBC bowling store.com but it’s not cheap ($695).  Also, Lane Dressing Inspection Reports are required annually.

ARC info available to everyone – He mentioned ARC (Assoc. Resource Center) that is on bowl.com and is updated and invited all to go in and check it out and download it.

Bowling Ball Study – Then he went into the Bowling Ball Technology Study which is the result of four years of testing.  Some of the changes to ball requirements will come in 2019; others in 2020.  The reason for these changes is because the volume of oil has tripled over the last decade.  Bowling balls have advanced technology, but the lanes/playing field are still the same.

One of the biggest changes that affects the most bowlers is that the balance holes must be plugged by July 31, 2020 (this process can start Jan. 1, 2020).  We were told these changes need to be done to protect the playing surface because things like scuffing grit on urethane balls is hard on the lanes.  Also, we were told not to plug balls now or they are illegal.  Another change to be aware of is bowlers can only us a dry towel during competition.  We were told that if centers add more and more oil to protect the lane surface and slow down the transition.  USBC wants to keep the same scoring pace with lower oil volume.

Merger Update – 125 mergers of associations completed this last season.  There is approximately 250 left to complete this year.  Nationally, USBC processed 60 of the 250 already this year.  Tracy, CA is the only association in CA not merged.

IBM & HoF – Next up was Tracy Ebarb/International Bowling Museum & Hall of Fame.  Tracy is the Director of Business Development.  He pitched the annual fee of $29 for having a Sustaining Membership into the International Bowling Museum & Hall of Fame which had (46) members in 2016; (173) members in 2017 and their goal is to get (400) in 2018.  For $29 you get a sticker and a membership card signed by Mike Aulby.  They also have a brick program to honor a bowler or organization.  Info can be obtained at bowlingmuseum.com

Awards Banquet – Saturday night was the Awards Banquet honoring this year’s State Hall of Fame inductees – Earnest Lou Gilless for Meritorious Service and Johnnie Englehart for Superior Performance along with Johnny Humble for Manager of the Year, Chris Preble for Coach of the Year and Ken Meryman for Youth Director of the Year.  Matthew Carpenter and David Waybright were also recognized as the 2018 $1,000 Youth Scholarship Winners.

Note:  All State Officers and Directors have their committee reports that were presented at this meeting on the CUSBC website.  Reports are posted above.

Two youth bowlers were recognized that received the CUSBC $1,000 scholarship—Matthew Carpenter and David Waybright—and both of them were Youth Delegates at this convention.

The 2017-18 CA BVL donations totaled $107,228.97 which again put California as the top contributor nationally.  The hat was passed around at this meeting and $1,055 was collected to kick off this year’s BVL drive!  The 2019 State BVL Tournament will be held in Stockton.  It was also mentioned that there will be some changes to the divisions.  BVL is adding another division for the Men so now there will be six divisions for Men, Women and Youth. 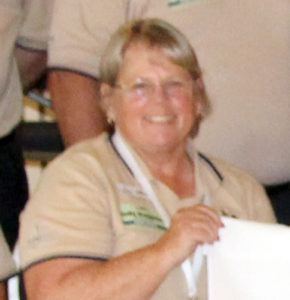 Elections were held, and Kathy Bruegeman (photo right) was elected the new CUSBC President replacing Rosie Parker who termed out.  David Waybright was re-elected to another term as CUSBC 2nd VP for Youth.  Both Kathy and David were elected by acclimation.  An election was held for (5) incumbent CUSBC Adult Directors and (2) incumbent Youth Directors and all were re-elected.  President-elect Kathy Bruegeman and Assoc. Manager Larry Peppers were elected to serve as the two National Delegates for 2019.

There was only one Bylaw Proposal (B-1) up for approval and it passed.  It involved the Board of Directors/Election of Directors to have qualifications be submitted, in writing, at least 30 days prior to the opening of the Annual meeting to allow the Nominating Committee time to evaluate the qualifications of each candidate. 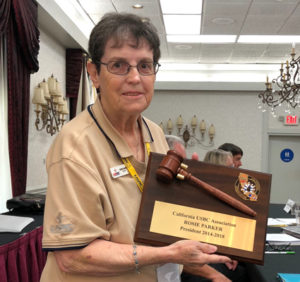 Thank you Rosie for your years of service on the CUSBC board!