Manager of the Year
Will Padgett 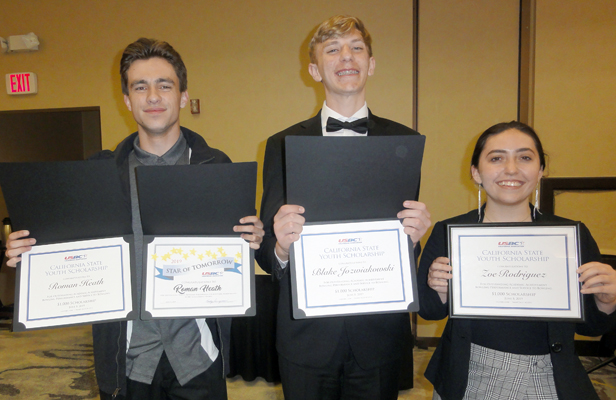 Congrats to Daniel Hong for shooting a 300 game!

The 13th annual CUSBC State Convention took place down south in Ontario the weekend of June 7-9. Delegates from associations all across the state attended.

Fri., June 7:
–Friday night kicked off with a Mystery Doubles Tournament Mixer held at Bowlium Lanes in Montclair put on by the CYC Youth Committee and run solely by the youth. We had 16 bowlers show and had one 300 game shot by Daniel Hong from Fullerton. We paid out giftcards to the top three places.

Sat., June 8:
–Saturday started with Delegate Registration at 9am until 4pm.

–Then the Youth Meeting was from 11am-12 noon for all the Youth Delegates. We provided an update on what the CYC has been working on. One is a new youth scholarship that a family member started in memory of his aunt and uncle that were so involved with California bowling. It is the “Braheme Family Memorial Youth Scholarship Award Application” for $1000. We also presented some of our youth honor award that were applied for. These are for 298-299-300 games and 700-750 (girls) and 800 series awards. We were unable to show two videos of our youth so that was postponed until the Jamboree.

–The USBC Jamboree took place from 1:30pm-4pm with USBC Western Regional Manager David Prange and was open to both Youth and Adult Delegates. The room was filled with approximately 80 attending. David started the Jamboree with a film clip from the TV show Kelly & Ryan which featured Katelyn Abigania, from San Diego, who is a reigning U12 Division Jr. Gold Champion and she showed off her bowling skills on a temporary one lane and easily got a couple of strikes on live TV! She represented the sport very well.

But, next, would make all of GEUSBC bowlers proud, as he brought up the Eyewitness News/Channel 29 big interview with CUSBC 2nd VP David Waybright for his signing with Arizona Christian!! The room went wild!! David went red!!! Priceless!!!

Prange then went into his first presentation which outlined the ALA (Association Leadership Academy) and said that in 2018 272 associations/540 attendees participated. So far this year they have had four at the IBC (International Bowling Campus) in TX. He encouraged associations to participate in this.

Next up was information on the Center Certification program. Prange said they have been collecting a lot of data since 2018-19 was a grace year. But, he added, that 2019-20 season will also be a grace year. He encouraged all to complete certification and send them in on the updated center inspection report. Associations can now charge up to $10 per lane for this inspection if they so wish. But, he stressed, this is purely up to each association to decide. These reports are due each year by Aug. 31st and he added to send them in with what’s wrong because USBC want to know. Some interesting stats….24% of all centers pass all specs.; 76% have less than 5% out of spec.; 92% have less than 10% out of spec; and, 52% of all measurements are out of spec.

Under Equipment Specifications. August 1st is when the dry towel rule goes into effect. Dry shami’s are ok. Also on August 1st, the SafeSport RVP has to be passed by all association directors. This was passed by Congress and is a Federal Law as USBC is a member of the National Olympic Committee and that is why all associations under USBC are included. You will be removed from your Board by USBC if you are not compliant. And, USBC can dissolve an association if they all don’t comply! Any new Directors (18 years or older) elected to an association have (45) days of when they take office to take this RVP test. RVP is renewable once a year and takes like eight minutes to do. And, if you are RVP certified under another organization under SafeSport, like say Boy Scouts, you need to just go on and add USBC to your certification to be ok. While we are on this subject, under Observable Interruptible, make sure there are (2) adults in with a minor in closed offices like say the Tournament office. This is keeping all our members safe from abuse and inappropriate behavior designed for youth but it really encompasses adults and seniors as well.

When David asked how many at this Jamboree went to the 2019 USBC Convention only about a fourth raised their hands. Prange then showed a video of comedian Tim Gad that performed at the USBC Convention and here were a couple of the takeaways he presented—connect socially one on one; talk with people, not at them; and, keep the need to find new ways to connect with people.

USBC needs to have all association Archive Files up to date. Be sure to send your current ByLaws to them to have on file in case something ever happened to your association’s office. David said he hopes to continue his conference calls with association Presidents & Assoc. Managers. And, as always, please feel free to share any success with David (David.prange@bowl.com)!

Saturday night was the annual Awards Banquet and was well attended. The following were honored:

Youth Program Director of the Year:
Tammie Myers (not present)

General Manager of the Year:
Will Huefner

Sun., June 9:
The 2019 CUSBC Annual Meeting took place on Sunday morning. Credential Report showed only (46) Adult Delegates, (12) Youth Delegates and (15) CUSBC Board present for a total of (73) eligible to vote.

For CUSBC Championship Tournaments, the Open/Women’s to date have had (416) teams competing this year and budgeted for (450). CUSBC Championship Tournament for 2020 will be held at Forest Lanes in Lake Forest with opening weekend April 4-5 and will run for nine weekends with the final weekend of June 27-28. $15,000 will be added to the prize fund!

Youth State is coming up in July for three weekends. They are going to try something new at Youth State with a random draw each squad (lane & bowler position) and will give out $100 scholarships! In 2018, Youth State had (120) teams and awarded $30k in scholarships. Pepsi Youth runs from Nov. thru May and awards $50k in scholarships. They have also upped it now where there are 8 winning divisions instead of 6 plus they also qualify for Jr. Gold. And, they have also just partnered with Strike 12 Jerseys (Strike12Creations.com, 805/552-6771). Check them out if you are needing shirts for your board. 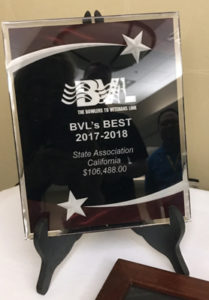 For CUSBC Committee Reports, BVL had 220 bowlers compete in the 2019 BVL Helen Duval Classic back in March. They are currently looking for a center to host the 2020 BVL State tournament. And, once again, California was number one with the largest state association contributing to BVL for the 2017-18 season for the amount $106,488! CA has about 80,000 bowlers for 2019. Senior Singles (for bowlers 50 years of age and older) will take place in Monterey (Aug. 22-25) and they have 275 entered so far. CA State Singles will take place Oct. 19-20, in Santa Maria at Rancho Bowl.

CSSBA (Calif State Senior Bowling Assoc.) is hosting their 50th Cal State Senior Open Championships mid-Oct. thru mid-Nov. for five straight weekends. They already has 368 teams scheduled. It will be held in Modesto. Deadline to enter is Sept. 1st.

CUSBC Assoc. Manager Larry Peppers announced that the State Attorney General now requires a permit for raffles and that any group, league, or association needs to be careful when saying they are running a raffle – especially if you don’t have a permit and are not registered to run a raffle. If you register, they will require you to summarize all raffles by date, say how much income, how much expense, etc. Stay away from holding raffles – call them an “Opportunity” ticket.

Elections were held and all were incumbents except for two Directors—Terri Azvedo & Ronnie Yukihiro—both candidates had filed their nomination papers prior to the meeting and were introduced. Both were from Orange County. There were no candidates from the floor. All candidates up for election were voted in.

Also at State Convention: Spectrum Credit Union had a booth outside our room for the Annual Meeting and Daniel Hasegawa was there to announce that Spectrum has now added CUSBC to their Credit Union and offering memberships. If any of us from CUSBC opens a membership with the Spectrum Credit Union, a $25 donation from Spectrum will go to our State Youth Scholarships; plus $25 will go to YOU when you open your account. And, after opening an account, if you refer a family member to open an account then that initial member will get a $25 referral fee and the new account member will also get $25.  They have great rates to get loans (1.85% for money market). Contact Daniel today at 510-627-5039.