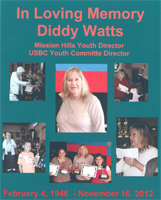 There isn’t one youth bowler, parent or coach in the San Fernando Valley, or at the State Scratch Tournament, who didn’t know who Diddy was. Diddy’s name and reputation, like many others before her, became synonymous with the term “youth bowling.”

Let’s go back to the beginning. It was the mid 70’s and a newly-married Jewish girl shows up to bowl at Starlite Lanes on Lankershim Blvd. in North Hollywood, CA. “What, no FREE bowling?” she yells at the desk person. Just kidding, Diddy would never do that! Diddy became well known at the center and at the urging of Ernie Wargo, Starlite’s manager and Pat Shatt, the Women’s Bowling Director, Diddy soon became a delegate for Women’s Bowling and the center’s youth coach. When Starlite closed its doors, Diddy took advantage of owner Bill Mossontte’s big heart, and from that point after, Mission Hills Bowl’s youth program remained a prime example of what a dedicated center could do for youth bowling. Her two sons, Dean and Randy grew up in the program and she saw the great value that bowling offered the kids, thus spending the rest of her life trying to improve ALL youth programs. With the help of Cathy Wells, Diddy became a leading force in the SFV YABA and was President of the youth association for many many years. These activities took her around the country and state to represent Youth Bowling at many tournaments and various conventions.

Diddy ran the youth program at Mission Hills Bowl for 29 years. She enjoyed a 154 average until an industrial accident in 2001 ruined her shoulder. However, her shoulder did not deter her love for helping the junior bowlers. She ran and organized her local association events for over 18 years and soon became involved with the California State YABA in 1999.  With the Open, Women and Youth state organizations merging together in 2006, her strong youth bowling beliefs were extremely needed to help build this new organization’s core. Many years later, her dedication along with the transition committee shined through as she was remained chair of the CA State Scratch Youth Tournament that awarded over $3000 in scholarships each year, and continued to help run the Pepsi Youth Bowling Championships District 5 and State Finals.

We all knew Diddy’s love for gambling and for the Miami Dolphins. A youth state tournament site selection tour brought a small group to Fantasy Springs Lanes and Casino one year. Diddy said she had to use the restroom, but ended up with pockets of quarters from the casino. She would’ve gambled more if she wasn’t dragged off of the casino floor. Board meetings on Sundays in the fall were short and to the point with Diddy because football season had begun. I believe there were a couple times that she yelled “YESSSSS” during a meeting while secretly watching the game through a glass wall or reflection. Those are the fun moments that we will all dearly miss. Diddy’s pure honesty and upfront demeanor are qualities that we should see more often in others, and ones that we will always remember with Diddy. I know that she is making a difference- wherever she is- because she did with us.