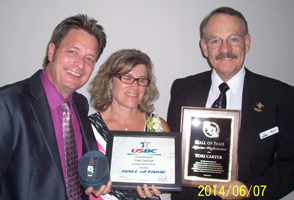 Tori Carter has been bowling since she was nine years old and won the New York State Jr Championship title when she was 15 years old. She lettered in high school in her sophomore year for bowling and has been an “All Star” since the 1980’s. She started bowling in the California State tournaments in 1982 and has excelled being on the winning Team in 1988, 1989 and 2001; she won the Doubles with her sister Robin in 1992 in Modesto and All Events in 2001.

She was WWPB Bowler of the Year in 2001 and holds a Singles title in the Women’s All-Star Association where she was on the Southern California all-Star Team three (3) times. As a member of the Los Angeles WBA she was on three (3) winning Teams; won a Doubles title with Virginia Norton and one All Events title. In the Orange County USBC, once again she was on the winning Team in 2002 and held High Average in the San Fernando Valley WBA in 1981, 1988 and 1998.

Tori has been a member of the California WBA/USBC for over 20 years and has been a Personal Trainer for the last 15 years. She is married to Jeff Carter and has one son, Dave, who is a Paramedic. Tosh Kinjo was her coach when she first decided to get serious about bowling and since has been fortunate to be coached by the John Fantini, Bill Hall, John Jowdy and Danny Wiseman.

She hails from the well known Romeo family with her mother Joan and sister Robin icons in the bowling world.