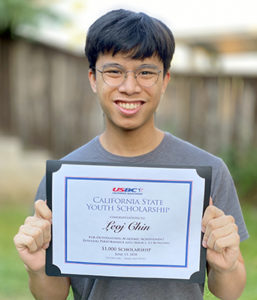 LEOJ CHIN is currently a 4.0 GPA senior at International Polytechnic High School in Pomona. He bowls in the Turtlebowl Youth Program at Oak Tree Lanes and has bowled in 10 years youth state, local championship tournaments and the Pepsi Youth Championships. Leoj has one 300 game and a high series of 731.  He is also a regular member of JAT and JBT.

Bowling has always had a major influence on Leoj’s life. His dedicated practice, league and tournament bowling is gearing him up for a possible national championship — either collegiate or even professional!

Leoj plans to pursue a Bachelor‘s degree in film and television at the Savannah College of Art and Design. He’s hoping to be a part of some major production studios like National Geographic or Disney. After graduating with a film degree, he plans on coming back to California to pursue a Bachelor’s degree in business. His hobbies include photography and traveling. 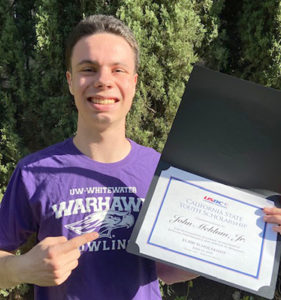 JOHN MEHLUM JR is a senior at Valencia High School and has bowled league at Kentwig Bowl in Vallejo, Napa Bowl, Double Decker Lanes in Rohnert Park and most recently at Santa Clarita Lanes.  John’s high game is 300 and his high series is 753. He has participated in 10 local championships and 5 state championships.

John also enjoys other thinks like fishing, baseball, basketball, football and cars.  His personal goals are to be a general manager of a professional sports team and win the major championship for that league.

We will honor both Leoj and John with their scholarship award at our awards banquet in 2021 Fresno. This year’s awards banquet was cancelled due to COVID-19.