San Diego – The Town and Country Resort and Convention Center in San Diego played host to our first Annual California USBC (CUSBC) Convention weekend of June 1-3, 2007.  The weather couldn’t have been better for the delegates, family members, friends, and other USBC members who “came along for the ride”.

When the Product Fair opened Friday at 5:00pm, there were a stream of delegates who had already registered and anxious to spend their money. The 15-Year Club capped off the evening with their meeting at 7:30 pm.

The agenda for Saturday was a long one beginning with Registration at 8:00 am.  The Product Fair was scheduled to close at noon to clear the schedule for other activities but many delegates were seen revisiting the vendors to see what sales they might have missed or to check the raffle board to see if they had won anything.

Our guest speaker, Roger Dalkin, USBC CEO held a captive audience at our Workshop, with his extensive review of the “Future Directions of USBC” and a wrap-up with a Q&A session.

On Sunday, President Al Hoffmann called the Annual Meeting to order at 9:00 am.  Although the presentation of the flags is always emotional, it took a different meaning this year, because included with our American Flag and California Flag was our NEW CUSBC FLAG.  We all felt so proud.

During committee reports, the BVL Committee reported that the California USBC was awarded the “Pillar Award” by the Greater Los Angeles Veterans Administration Center, which is given to an organization who exceeds all others in donations.  For the 2006-07 season, we donated $157,395 to 30 Veterans Centers in California.  And, the committee reported as of the date of this meeting, donations amounted to $169,838.01 and growing.  The BVL State Finals Roll-Off at Admiral Robinson Recreation Center in San Diego was very special this year in that the youth bowlers would be eligible to participate in their local tournaments.  Of the total of the 401 local division winners, 145 Adults (50.5%) and 73 Youth (64%) bowled in this tournament.

The Tournament Committees reported the selections of the hosting associations for the 2008 Championship Tournaments.  As information develops, you can find it on our website.

Our first Annual Delegates Luncheon was held at the Tiki Hut around the pool.  A delicious menu was served to135 members and guests.

Award presentations: 2007 Star of Tomorrow Award: Rose Lynn Brown, Modesto and Douglas James Lauer, Twenty-Nine Palms, were introduced.  Each received a beautiful photo-etched 12” Star Plaque and a custom embroidered jacket with the Star of Tomorrow logo. In addition, they each received $1,000 scholarship to further their college education. Inducted into our 2007 Hall of Fame was Stephanie Steiner, Hayward for Meritorious Service and Ross A. Packard, Santa Clara for Superior Performance.  Ross was unable to be present.  Jim Decker was presented with the Proprietor of the Year Award on behalf of Double Decker Lanes in Rohnert Park and Citrus Belt USBC was presented with Association of the Year Award.

With no further business and following the retirement of the flags, President Hoffmann declared the meeting adjourned at 3:30 pm. 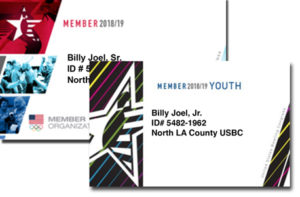